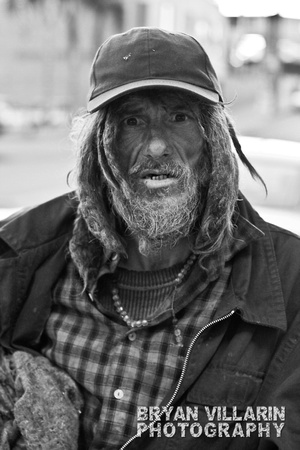 What’s the premise? I’ll offer $1 to anyone who asks me for money in exchange for their portrait. I’m a shy person, but I’ll do my best to find out a little about the person. You never know if it’ll make someone’s day for at least talking to them a little bit.

Rick stopped “briefly” talk to me while I was waiting outside Regent China Inn. He told me that someone took his photo a few days ago, even though he didn’t give him permission.

Trying to decipher a myriad of his tangents (over the course of 10 minutes), I learned that he was from Culver City.

Rick was on his way to a facility down the street to see if they were giving out food.

He never did ask me for money, but I offered him a couple bucks anyway because he seemed pretty nice. Other than that, I didn’t really get a chance to get a sentence in. He was a talker.

Before we parted ways, I asked him if I could take his photo. He positioned himself in a better light – and away from the front of Phillipe’s – but the bill of his hat blocked most of it. Oh well.

Sidenote: My cousin, Cheryl, is a psychology major. She suggested that he could have a mild case of schizophrenia.

Talk to me, Goose Cancel reply