I’ve been using AirPods for about eight days. Feels great without the cord, and sounds good across lots of podcasts, music, and video. They stay in while smashing tickets, eating a meal, washing dishes, taking a walk, or riding a bus. I’ve also worn them successfully while lying in bed for a short period of time. They won’t stay in if I fall asleep, which I expected.

I’m usually around a power source, so I haven’t thought of battery life in depth. However, air travel is in my future,1 and I plan to leave my Sony MDR-7506 headphones at home to free up space in my backpack.

Looking at Apple’s product page, I haven’t used Siri with them yet. Perhaps I need to find some podcast episodes for very simple ideas. Suggestions welcome!2

A few times, I mentioned to Amy that wearing them makes me think of something from an episode of Black Mirror. Pretty trippy. 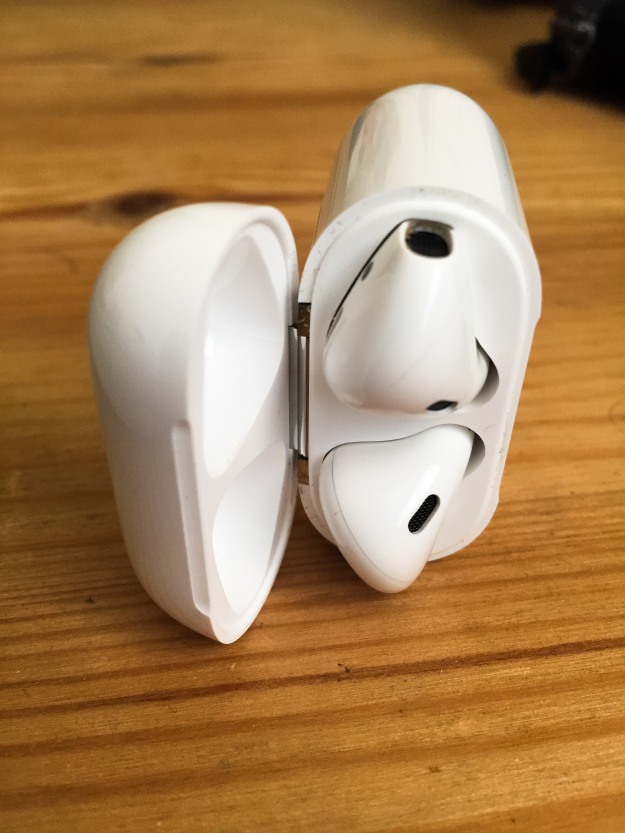 I misplaced my AirPods for several hours. It was rough, especially since I bought them less than four days ago. 😁

Last night, I placed them in my messenger bag. I had ventured out to visit a friend, and requested a pickup from Lyft1 to get home. After I got home, I couldn’t find my AirPods. Neither could my friend, or the Lyft driver.

After four or five times looking through my “empty” messenger bag, I realized there were exterior side pockets. I rarely use them; my stainless steel water bottle won’t fit.

Conclusion: The AirPods case can fit in those exterior side pockets. 😊

P.S. I wrote this post on January 22nd, and changed the date to reflect the day this happened.

I can comfortably write in Simplenote, WordPress, or Day One apps on our TV. If I don’t want my laptop on my lap, or my iPhone in my hands, this is another option.

We didn’t plan on upgrading my white iPhone 4S 64 GB because it wasn’t a priority. Then, Amy dropped her phone and most of the front screen was cracked. Wah wah.

I’ve been out of contract for awhile, so I was eligible for an upgrade.

I chose the silver iPhone 5s 64 GB, we finally merged our Verizon Wireless accounts, and switched to a less expensive plan — at the cost of my grandfathered unlimited data add–on.

I installed DataMan Pro for real–time monitoring and alerts, and I’ll make sure I keep it under 1 GB per month.

For reference, here’s how we switched things over.

Note: I forgot my restore password and didn’t save it into my password manager, so I couldn’t just restore the data onto my new phone.

I finally added OpenDNS servers to my Apple AirPort Express. (My previous router died while under warranty, and waiting for a replacement would take too long, so I bought an AirPort Express at the Apple Store in Pasadena.)

While their “Configuration for AirPort v7.6.1” instructions are almost spot on, a couple screenshots didn’t reflect what I was seeing in AirPort Utility 6.1.

I couldn’t find anything with an updated screenshot, so I sent one to OpenDNS support. Until they update it, it should look like this:

While hunched over my Java textbook on the fourth floor of the university library, I gazed out the windows and saw rain clouds hovering over Pomona. Earlier that morning, my mom complained that it was supposed to rain yesterday. The clouds knew something I didn’t.

At 4:38pm PDT on Wednesday, October 5th, 2011, a flood of Twitter updates moaned that Steve Jobs has died. I didn’t know him personally, but I was stunned. Looking around the huge room, I was unsure if any other students realized the tragic news. (If they were on Facebook or Twitter, I assume they did.)

I found it difficult to focus the rest of the evening.

As a sixth grader, I was part of a group with fascinating computer chops. (Or, something like that.) While I honestly don’t remember much, we demonstrated a slick presentation made for our parents and faculty.

Along with my still functioning iPod Classic, those are my only personal experiences with Apple products. Steve dangled all this stuff in front of me for years. Now that I can finally see myself going completely Apple, he’s gone.

My deepest condolences to his family, friends, and all the lives he’s touched (directly and indirectly).

After much consideration, I finally bought a MacBook Air. It’s my first Mac.

PowerMax got my money, not MacMall

I almost bought my Mac from MacMall. But, when I got to the payment step, the math wasn’t correct. The MacBook Air, USB ethernet adapter[1. I bought the USB ethernet adapter just in case.], shipping, and tax didn’t add up to the estimated subtotal (which was six dollars more). 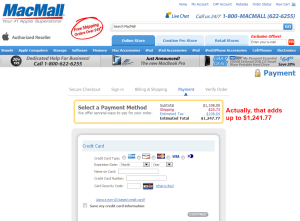 Next, I stumbled onto Oregon-based PowerMax. Their site was visually much more pleasant. After over an hour of reading through their company information about pages, warranty information, and plenty of good feedback, I made my purchase.

Another bonus: I saved on sales tax and opted for free shipping.

After two days of processing and six days in transit, it finally arrived. Thanks PowerMax!

By the way, I finally heard back from MacMall. It took four business days (six days total). While I explicitly stated I did not want to order over the phone, the MacMall Account Executive replied:

If you call my extension I will be able to place the order for you with the correct price.

Wow. No explanation about the math error. That’s a shame.

Opening the box was an elegant experience. I wasn’t rushing. I couldn’t help but snap a few photos. 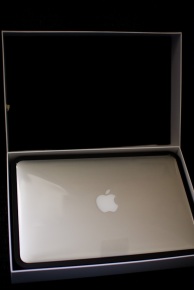 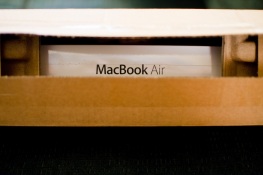 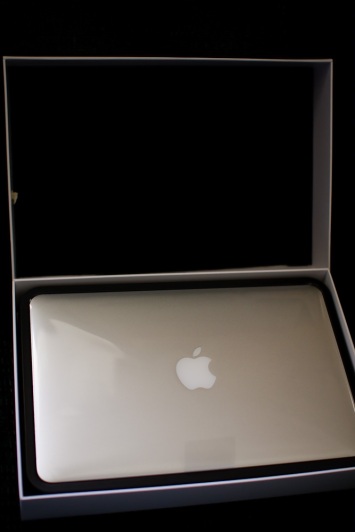 I’ve been following the directions and suggestions from “How to Switch to the Mac” by Tao of Mac. To minimize any botched accounts, creating a standard user after creating the first Administrator user was stated several times in the article. Once I got that out of the way, and skimmed through the booklet, I was ready to get going.

Another security measure for working at public WiFi hotspots is to configure PPTP VPN to connect to my DD-WRT router at home. (See DD-WRT PPTP Server Configuration for Mac OS X. I needed to force encryption on my router. I should probably update my router firmware, then use OpenVPN.)

The boot and wake speeds are ridiculously fast:

With Google Chrome, , , Stickies, iCal, and Activity Monitor open, my system is using 1.66 GB of memory, leaving 2.34 GB free. I would be usually running Thunderbird, too, and possibly iTunes. The best part: the system feels incredibly snappy. (I don’t think it’s just cool and new to me. Honest!)

Easter Egg: If you’re on Mac OS X Snow Leopard (10.6), try holding Shift while clicking a stack or folder in your Dock for some slow, smooth opening action.

Other odds and ends

I wanted a MacBook Air since it was first released January 29, 2008. With the switch to SSD, it was even more tempting. I don’t need a lot of storage space this laptop won’t be my primary computer.

With a few textbooks, my messenger bag was already heavy. I didn’t want to carry a separate bag for my laptop, nor did I want to lug around one huge bag.

Furthermore, I’m not necessarily biased toward PC or Mac. I see strengths in both. While you can get a PC for much less than a MacBook Air with similar or better specs, it’s not all about specs. It’s a beautiful feeling to put my laptop to sleep in a couple seconds or less, then to jump back into my work much later without missing a beat.

After reading Marco Arment’s thoughts on the 2010 MacBook Air, then trying the 11” MacBook Air at the Apple Store, I felt pretty confident that sacrificing screen size wouldn’t affect my usage. I love that it has a full-size keyboard.

So far, I’m extremely happy with it. I write, read (Google Reader or Instapaper), and check email. Speed isn’t a problem. Even right now, I’m typing this blog post from Bean while relaxing on my couch. The screen brightness is set at “4” and I can see everything on my screen pretty comfortably.

As I get accustomed to Mac OS X, you’ll probably start seeing related posts in the near future, so I’m stoked for another layer of diversity here.

If you have any articles for new Mac users, recommended software, or other usage tips, please leave them in the comments.